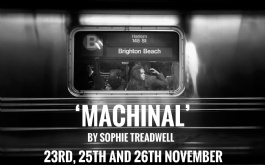 We are excited to announce that we will be performing Machinal by Sophie Treadwell on 25th-27th (Thursday – Saturday) of November.

Machinal follows the life of Young Woman who, constrained by a society that favours men and money, marries her employer despite not loving him. As we move through her life from marriage, to honeymoon, into motherhood and eventually an affair, the audience are asked to question if it is possible for women to live independently of men. It is the story of a woman battling the consequences of decisions she felt powerless to overturn, a woman who murders her husband to free herself from a suffocating marriage, a women finding agency in her life.

Treadwell was a journalist for the New York Times and was inspired to write the play while covering the real life case of Ruth Schneider – the worst woman to be executed by electric chair in the state of New York.