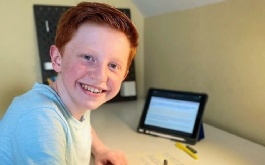 We are delighted that Finn in Year 9, has recently been chosen as the Greater London winner of the National Translation Competition, run by Oxford University.

The competition workpiece involved translating part of a book entitled Le Jardin du dedans-dehors (The Garden of the Inside-Outside) which tells the story of a young girl and her family who move to Iran in 1980 at the beginning of a war between Iraq and Iran. The girl and her brother enjoy exploring their new garden which seems sheltered from the upheaval taking place beyond the walls.

Commenting on his achievement, Finn said: “I was astonished to win! Learning French at Challoner is fantastic, and I thoroughly enjoyed the translation competition.”

The Translation Exchange launched a new competition for schools last Autumn which aims to promote language learning across the UK and to inspire creativity in the classroom. A team of Oxford MFL Undergraduates, as well as professional translators from across the UK, made up the judging panel.

The competition is inspired by the life and work of the great translator, Anthea Bell OBE who is ranked among the leading literary translators of the 20th and 21st centuries. Her work from German, French and Danish into English encompassed the writings of Freud, Hans Christian Andersen and many others.