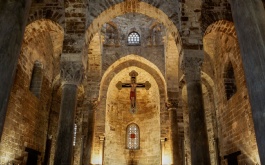 "Pope Francis will meet an exhausted and weary band of Iraqi Christians, a community decimated by decades of war and persecution. Prior to the U.S.-led invasion of Iraq in 2003, about 1.5 million Christians lived there, nearly 6 percent of Iraq’s population, itself down from about 12 percent in the World War II-era. Today, estimates range wildly, with some claiming that as many as 500,000 Christians remain. Most observers recognize, however, that there are fewer than 300,000 Christians in the country, many of them displaced by Iraq’s civil war between 2006 and 2008, the occupation of the Nineveh Plain by ISIS in the summer of 2014, and the economic and security uncertainties that remain a fact of life in Iraq today."

Please head over to Salt&LightTV to read the full post.

Image by Taken from Pixabay