Have you ever heard of the story of Pere Jacques? 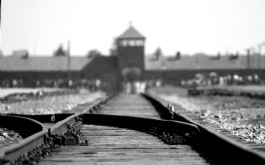 "The Catholic Church boasts hundreds of thousands of saints from the times of the New Testament to the present. Many fascinating saints lived during the 1900s, and many of them are in the canonization process right now.

One of these is a man named Père, or “Father,” Jacques. Born in Normandy, France, in 1900, he felt called to live a life of piety and service and was ordained a priest in 1925. He served the Diocese of Rouen in Normandy.

In the 1930s, Père Jacques opened an all boys’ school in Avon known as the Petit Collège Sainte-Thérèse de l’Enfant-Jésus (High School of Saint Thérèse of the Child Jesus). When World War II broke out and the Germans invaded France, Père Jacques realized that Jews were in grave danger. He hid three Jewish boys at his school, disguised as students with false names. He also hid an older Jewish boy as a worker at the school, had a Jewish student’s father hide with a friend in town, and disguised another Jewish man as a new teacher at the school."

Please head over to GetFed to read the full story.

Image by Ron Porter from Pixabay