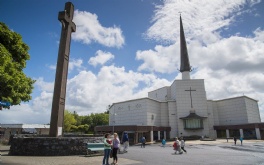 "Pope Francis will officially designate Knock Shrine in Ireland as an international Marian and Eucharistic shrine on the feast of St. Joseph next week.

The Irish Catholic Bishops’ Conference announced March 11 that the pope will give Knock Shrine official recognition and send a video message to the shrine on the night of March 19."

Please head over to the CNA to read Courtney's full post

Image by John Callister from Pixabay