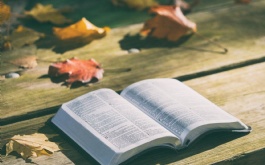 "A few months ago at Mass, I heard a story from the book of Samuel that sparked my interest. As the reading goes, one night in ancient Israel, the preteen, prophet-to-be Samuel lived in a temple working for the priest Eli, and he could not stay asleep.

God spoke Samuel’s name several occasions that night. Each call left Samuel thinking that it was Eli, probably reminding him of some temple chores. Samuel checked in with Eli, who sent the boy back to bed, confused and restless. It took a few more calls for Samuel to realize the voice belonged to God, speaking to Samuel directly to warn him about the fate of Eli’s family. This event began Samuel’s vocation as a prophet, as he accounted God’s words to Eli, and God’s message manifested later on."

Please head over to BustedHalo to read the full refelction

Image by Pexels from Pixabay