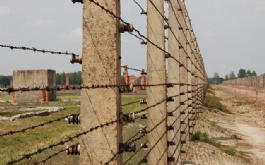 "Two out of three people suffer persecution because of their faith: “This is unacceptable!” says Pope Francis

Please head over to Pope's Prayer Network to read the full post and watch the video.