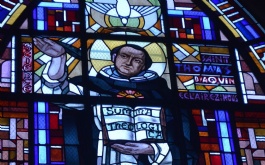 "Fra Angelico, like Saint Thomas Aquinas, was a follower of Saint Dominic, taking vows in the Order of Preachers.  And like Saint Thomas Aquinas, he worked tirelessly in service to the Church.  Whereas Aquinas spent his life teaching and writing works of extraordinary depth and breadth, from commentaries on Scripture to philosophical and theological treatises, as well as hymns and prayers, Fra Angelico worked his whole life as a painter, creating numerous works in a variety of forms: miniature manuscript illuminations, altarpieces, devotional panels, and frescoes in chapels in Florence, Rome, and elsewhere.

Both Dominican priests, both exemplifying a Dominican motto derived from Saint Thomas Aquinas' own writing, Contemplari et contemplata aliis tradere — to contemplate and to hand on to others the fruit of contemplation — they attained sanctity through their work: the scholar Aquinas using reason, logic, and argument; the painter Blessed Angelico using colors and visual forms."

Please head over to the CERC to read Jenny's full post

Image by Dorothée QUENNESSON from Pixabay