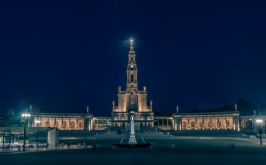 Stephen P White posts a reflection about Fatima on the CERC

"Forty years ago today, the Feast of Our Lady of Fatima, Pope John Paul II was shot at close range by a trained assassin in St. Peter's Square.  Our Lady spared his life.  "One hand fired," the pope would later say, "and another guided the bullet."

At first glance, the events of May 13, 1981 take on a political gloss.  The young Polish pope posed a moral challenge to the atheist, Communist regimes in Poland and elsewhere, as his remarkable pilgrimage to Poland in June of 1979 had shown.  In the face of the growing momentum of the Solidarity movement, Poland imposed martial law in late 1981.  Lech Wałesa, the leader of Solidarity, would win the Nobel Peace Prize in 1983.  The rest, as they say, is history: Polish Communism collapsed amidst the Revolutions of 1989.  The Soviet Union itself dissolved in 1991."

Please head over to the CERC to read Stephen's full reflection.

Image by Bernardo Ferreria from Pixabay