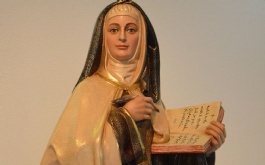 Will Wright posts about St Teresa of Avila on Catholic Link

"Teresa was born on March 28, 1515 and died on October 4, 1582. St. Teresa of Avila was born into the age of exploration in Spain, just two decades after Christopher Columbus opened exploration for Europe in the Americas. At the time, everything was in flux: politics, society, and religious were being vigorously debated. She was born before the time of the Protestant Reformation by two years and she died two decades after the Council of Trent was closed. "

Please head over to CatholicLink to read Will's full post

Image by Claudia Morcueto from Pixabay