What Is The Second Vatican Council? And, Why Did It Create Controversy? 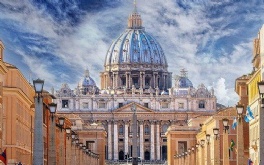 On January 25, 1959, Pope St. John XXIII took the world by surprise by calling a new ecumenical council of the universal Church. We now know this council as the Second Vatican Council (Vatican II), so called because it was held in Vatican City.

An ecumenical council can be called and convened by the Bishop of Rome (the Pope) or, historically, by the Roman emperor. The term ecumenical comes from both Latin and Greek and refers to being “universal” or “from the whole world.” In the sense of the Church, the word takes on the character of the “house” or “household.” So, an ecumenical council is a gathering of the People of God, the Church. The Pope and all the bishops of the world are invited to take part."

Please head over to CatholicLink to read the full post.

Image by Bernd Marx from Pixabay