Who are the 4 women were canonised on 15th May? 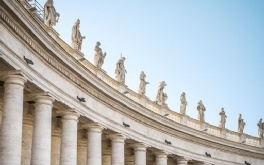 Courtney Mares posts on the CNA about the new women saints

"Pope Francis will preside over the first canonizations in more than two years this weekend.

Ten people will be officially recognized as saints by the Catholic Church on May 15. Among them are some relatively well-known figures, like Charles de Foucauld, Titus Brandsma, and Devasahayam Pillai.

Less well known are the four Catholic female leaders who will be canonized alongside them. Each of the women founded religious orders which have grown worldwide and made a lasting impact on the Church.

Here are the stories of these four holy women, who all happen to be named for the Blessed Virgin Mary."

Photo by Patrick Schneider on Unsplash